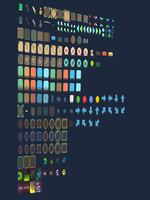 Hello! Time for another update!

This time I've finished the character animations and added a new enemy with all animations. Initially I would just introduce the enemy design and an Idle animation and then finish everything for the next update but, since I'll focus on the Cemetery pack, I decided to take a bit longer and release everything now. I also added a bunch of new UI elements.

The next update for this asset will happen after the first update of the next Cemetery pack, which I will start working on it withing 2 days from now and I should take about 1 month and 2 weeks to finish and 1 more week to release its first update.

Thanks for the reading and I see you in the Cemetery Pack.